Six months ago, Te Kakenga (TK) Kawiti-Bishara was a subscription agent working for Stuff in Palmerston North and dreaming of a career in journalism. 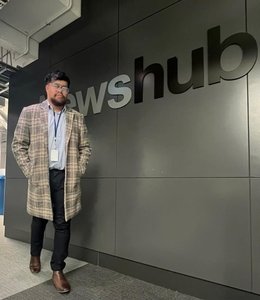 Six months ago, Te Kakenga (TK) Kawiti-Bishara was a subscription agent working for Stuff in Palmerston North dreaming of a career in journalism.

Fast forward and 20-year-old TK has just produced his first story as a Te Rito cadet, a piece on the rededication of Māori TV to Whakaata Māori, produced in both English and te reo for Pacific Media Network (PMN).

“I produced the story in te reo Māori and English, and it was a visual story as well,” says Kawiti-Bishara (Ngati Tūwharetoa, Ngaati Hauaa and Ngāti Hine). “I happened to be taking video and photos at the Whakaata Māori ceremony and was amazed when PMN were open to me doing a story in te reo Māori, using my own video and own content.”

TK is just one of 23 Māori, Pasifika and diverse cadet journalists taking part in the Te Rito Journalism Project funded by NZ On Air’s Public Interest Journalism Fund (PIJF). The programme is a groundbreaking initiative from four major media partners – NZME, Whakaata Māori, Newshub and PMN – who came together to build a training and development programme that would inject the hunga pāpāho industry with a diversity of voice and better reflect the communities of Aotearoa.

The cadets, who hail from all around New Zealand, take part in a one-year programme of training and work experience, learning about all facets of journalism from digital and print, to radio and broadcast television.

“The programme is designed to create cultural awareness in New Zealand newsrooms to address the shortage of reo Māori, Pasifika and diverse journalists,” says Gesa Luamanu, Te Rito programme manager. “Through diversity of voice, we can tautua (support) budding journalists who truly reflect our unique communities in a more diverse and inclusive way.”

The cadets spend time in each of the media partners’ newsrooms, where they learn hands-on from teachers and mentors within each newsroom. It’s something that GM of Content at PMN, Susana Guttenbeil, says is vital.

“Diversity of voice in a newsroom is so significant,” says Guttenbeil. “Because if we aren’t voicing our narrative, someone else will speak for us. We know our ancestors were gifted storytellers, orators and navigators, and we hope to instil that thinking into the news space – free of the constraints of mainstream and western ideals.”

The programme has exceeded all expectations, says Raewyn Rasch, Head of Journalism at NZ On Air.

“The Te Rito programme is a really great example of what the PIJF was set up to do,” says Rasch. “It has filled a big gap in journalism education in New Zealand and will meet a growing need from the sector for diverse journalists helping to truly reflect the Aotearoa we live in.”