Eight teams of creatives have been selected to receive funding through Every Voice 2022, a joint initiative between NZ On Air, Screen Australia and TikTok 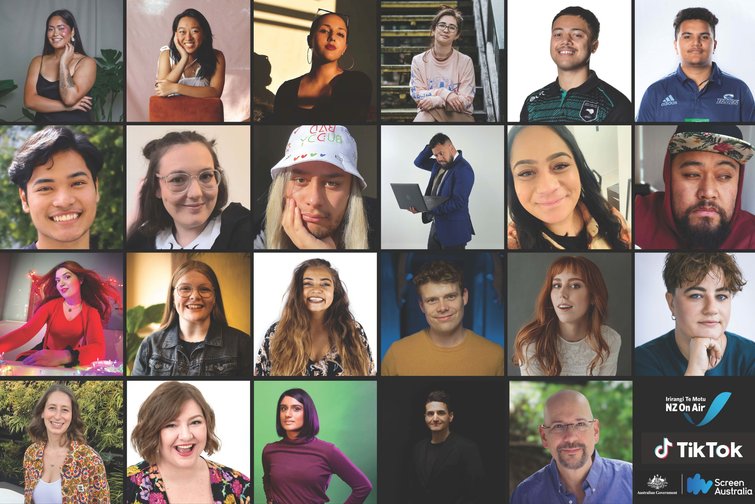 Eight teams of emerging creatives have been selected to receive funding through Every Voice 2022, a joint initiative between NZ On Air, Screen Australia and TikTok.

Now in its second year, Every Voice aims to support a new generation of New Zealand and Australian storytellers to develop Scripted or Factual content exclusively for TikTok.

Four teams from New Zealand and four teams from Australia have been selected, with each team receiving funding to cover the development and production costs for their projects. Teams will also participate in a two-day workshop in Sydney in December hosted by NZ On Air, Screen Australia and TikTok. The workshop will help the teams develop their projects, learn best practice for creating content for TikTok, and allow them to receive feedback from leading industry professionals.

NZ On Air Head Of Funding Amie Mills said, “It’s been a privilege to team up with Screen Australia and TikTok for a second year of this unique and important initiative. Every Voice is a powerful pathway for new and emerging creatives from a wide range of backgrounds to make their mark in the screen sector – telling their stories from their perspectives, and creating meaningful connections with their audiences.”

Screen Australia’s Head of Online Lee Naimo said, “We were so impressed by the quality of applications this year showing the wealth of talented online creators across Australia and New Zealand who are pushing boundaries in the vertical scripted space. With the series from the first Every Voice initiative releasing to great response, we’re excited to see the mix of projects from diverse and powerful storytellers, creating content from rom-coms and horror, to travel documentary and drama. Congratulations to the successful teams, we can’t wait to work with them to develop their projects further in the workshop next month.”

Felicity McVay, Global Head of Entertainment at TikTok said, "At TikTok, we are truly passionate about providing a platform for emerging and diverse voices who can express themselves authentically and give fresh perspectives on the cultural diversity of Australia and New Zealand. It's fantastic to see emerging creatives receive funding through Every Voice 2022 -  I can't wait to see these stories come to life and find their audiences.”

Ships in the Night: A 15-part Scripted BL (Boys' Love) series that follows Manaaki, a 19-year-old Māori boy, and Johnny, a 19-year-old Asian boy, who throw caution to the wind and get to know each other over the course of a single night. Written and directed by K-Ci Williams (Ngāti Tamaterā) and produced by Heather Pannowitz and Tristan Valencia, Ships in the Night is the story of two young men embarking on a night of adventure, vulnerability and maybe even love.

Whakapai: Whakapai is a series of short and light-hearted interviews with Takatāpui and QTBIPOC (Queer, Trans, Black, Indigenous, People of Colour) artists in Aotearoa, produced by arts and culture journal The Pantograph Punch with Āhua Collective. Whakapai has several translations in te reo Māori, including ‘set the table’, and ‘to praise or accomplish’. This eight-part series breaks bread with eight artists who contribute to Aotearoa’s creative scene, hearing about their journey and what has contributed to their success, through sharing a selection of items ‘at their table’.

P.I (People of Influence): Hosted by Tane Wolfgramm and Nooroa Takairangi, P.I (People of Influence) is a celebration of Polynesian and Māori excellence in the online and sports space. This 15-part talk show-like series aims to unpack the impact of 15 ‘people of influence' from across Aotearoa and Australia - invoking nostalgia, creating community, and inspiring the next generation.

The 9-5ers: Set in the fictional Māngere electrical appliance store 'Shock Value', The 9-5ers is a Scripted mockumentary series following the lives of three overly qualified Polynesian employees and their newly appointed ‘egghead’ boss. Written and directed by Regan Foa'i, and produced by Liz Laupepa and Danny Aumua.

Bad Locals: A 10-part documentary travel series which follows Ella and Naarah as they return to Tasmania to explore their island home. They will tick off all of the adventures they never got around to while they were living there such as abseiling, working on farms, bushwalking and more – all while sharing their lives and experiences with the world. Co-created and written by Ella Watkins and Naarah, the hosts also take on Director (Ella) and Producer (Naarah) under the production lead of Gabby McLeod (Removals). Rebecca Thomson and Ursula Woods are attached as Directors of Photography.

Girl Crush: a 15-part scripted musical rom-com series that tells the story of a 24-year-old aspiring musician, Jessie, who spends her days working at the local indie cinema, ignoring her hopes and dreams and sinking deeper into her anxiety. One day she is tasked with training a new cinema employee: local indie musician Brianna. Already a huge fan of hers, training Brianna gives Jessie a newfound purpose – until Jessie realises she isn’t just a fan of Brianna's… she’s in love with her. Girl Crush will star Samantha Andrew and Ally Morgan, with Morgan also writing and co-producing. The series is created by the team behind the award-winning short film Her Own Music with Olivia Aleksoski directing, Hew Sandison development producing, and Carina Burke attached as cinematographer.

Greystanes: Set in Australia in the 1990s, this 15-part scripted horror drama series explores the supernatural events that ensue when a nightmarish creature terrorises a Maltese-Australian community. To rescue its victims and defeat the Gadajdu – a slimy, humanoid predator from Maltese folklore – Australian teenager Samantha and her older brother Marius must reconnect with their Maltese roots, which they have largely ignored. Greystanes is created by director Ryan Cauchi and co-written and co-produced with Matt Ferro.

Jaffys: A 15-part scripted drama rom-com series which explores how to find your place in the world when you’re just another first year uni-student. Jaffys is told through two interconnected TikTok accounts belonging to Melbourne teens, as they navigate the transition from high school to Uni – braced for new friends, lovers, experiences (aka parties), and much more. Jaffys is directed and produced by Hayley Adams, whose credits include TikTok series Scattered, which garnered over 2 million views and Love Songs with over 20 million views across both seasons. Written by Vidya Rajan and Jenna Guillaume, it was developed at Unless Pictures with Development Producer Sanja Simic and Executive Producer Meg O’Connell (Retrograde).