Local content holds steady at 32% of television schedules but our annual Local Content Report reveals some challenges being faced by the television sector.

Since 1989 NZ On Air has measured local free-to-air television content. This report compares the schedules of the six national free-to-air channels, to observe trends and changes in the local content landscape.

Local content accounted for 12,145 hours of broadcast time in 2013, a 333% increase since the first report was published just over two decades ago.

Each year NZ On Air invests around $80 million in free-to-air television programmes supporting around 960 hours of new local content. This report is an important way we monitor the amount of total local content on television, including content we don't fund.

All figures in the report are based on an 18-hour broadcast day, 6am to midnight. Source data is provided by Nielsen.

In 2013, local content on the six free-to-air channels monitored increased by 0.8%, making up 32% of the combined schedules.

Trends are heavily influenced by the volume of hours of News/Current Affairs and Sport programming, which makes up 43% of total local hours.

An 11% decrease in first run content in 2013 continued a five year downward trend. This indicates reduced spending on new productions, and is a reflection of the ongoing difficulties faced post-global financial crisis by free-to-air broadcasters.

Repeat screenings comprised 5,302 hours (4,384 in 2012), accounting for almost half of all local content at 44%. A major reason for the increase in repeats is that 2013 was the first full year that Māori Television broadcast from 10.00am daily, and the additional five hours a day were primarily repeats of Māori language learning programmes.

By genre, Information and Documentary hours were up, as were Children’s Programmes, Drama/Comedy and Entertainment.
Sports hours had the largest decrease, down 509 hours on 2012. This genre fluctuates from year to year due to major sporting events; in 2012 the London Olympic Games inflated hours. 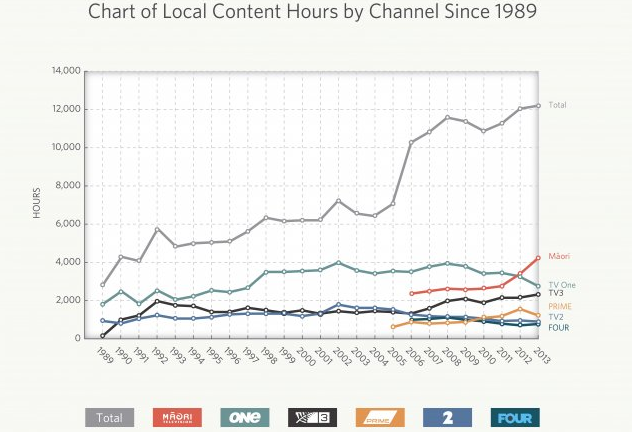 Local content on television increased 2.4% in 2015, although the amount of new programmes continued to decline.

New Zealanders enjoyed slightly more new local TV programmes in 2016 but there was less local content in prime time. The biggest increase was seen in Entertainment programming. Overall the …