This report monitors gender and ethnic diversity among key personnel of NZ On Air-funded projects, as well as regional spread of production companies.

For the past five years NZ On Air has published a Diversity Report as both a response to, and a contribution towards, discussions about gender, ethnicity and regional production representation in the local screen sector. NZ On Air, as a key funder of local content, is in a unique position to report industry trends.

This report monitors gender and ethnic diversity among key personnel of NZ On Air-funded projects, as well as regional spread of production companies. This report also monitors the gender balance among applicants and recipients of NZ On Air music funding over a four year period for New Music Single and New Music Project funding.

The 2020 Diversity Report includes survey responses from 164 Scripted and Factual projects funded between 2019 and 2020 that were fully delivered by March 2020, and not included in last year’s report.

Now that we have five consecutive years of data, we can report on consistent trends in several areas of the NZ On Air funded production sectors.

The key findings are: 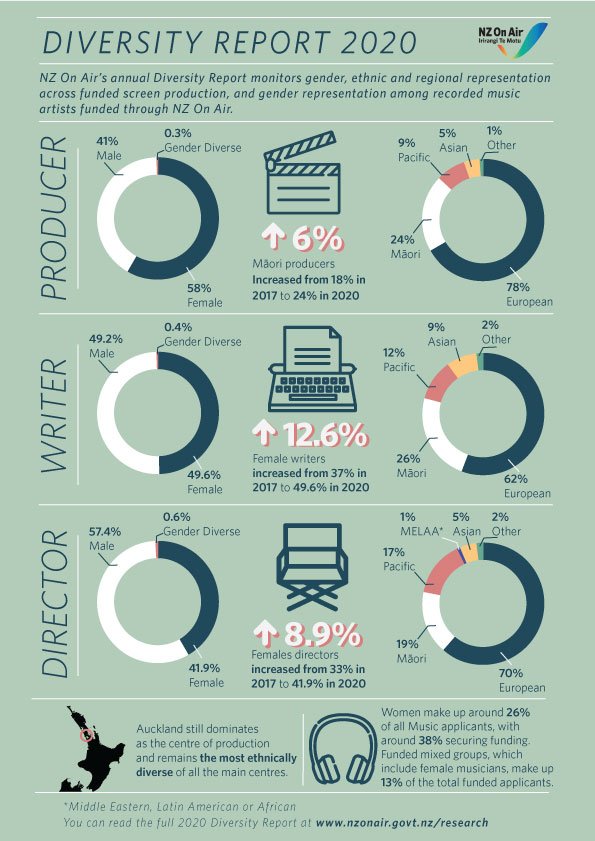