Public Interest Journalism has received an $18m boost with the announcement of funding for an additional 110 journalists* across Aotearoa with a specific mandate to produce stories that keep New Zealanders informed and engaged, and support a healthy democracy.

The funding is the result of the second competitive funding round via NZ On Air’s $55m Public Interest Journalism Fund. The fund was announced in February to address a deficit in public interest journalism, a key pillar in a healthy democracy.

Combined with the first funding round, $29m has now been committed to a mix of journalism roles, defined journalism Projects, and Industry Development initiatives.

Demand for the fund has been high. Round 2 saw a total of 63 applications applying for 311 roles and seeking close to $47m in funding.

Role-based funding is designed to support the revitalization of the industry, to address ‘news deserts’ and deficits in coverage of matters of importance to New Zealanders. Statistics NZ figures show that the number of journalists halved between 2006 and 2018.

“Funding journalists back into newsrooms particularly at regional and local levels will help redress the drastic reduction in journalist numbers over the past few years and ensure the sector has the workforce to deliver strong public interest journalism,” says NZ On Air Head of Journalism Raewyn Rasch.

The performance of the funded roles is measured on content outputs. Funded roles in this round are geographically spread across the country, and will also go some way to address deficits in reporting for specific ethnic communities or issues.

The funding includes an expansion of the pre-existing Local Democracy Reporter scheme, and a new Open Justice – Te Pātiti scheme to fill gaps in court reporting, ensuring the public is better informed in these critical areas.

A map showing distribution of funds to date is able to be downloaded here.

*This figure does include 16 Local Democracy Reporter roles that were funded for a fixed term originally out of one-off allocation.

All roles are funded for two years unless otherwise stated.

Allied Press, 4 x roles for Otago Daily Times and other Allied Press properties, up to $711,797

National Pacific Radio Trust, 4 x roles for Pacific Media Network, for one year, up to $275,000 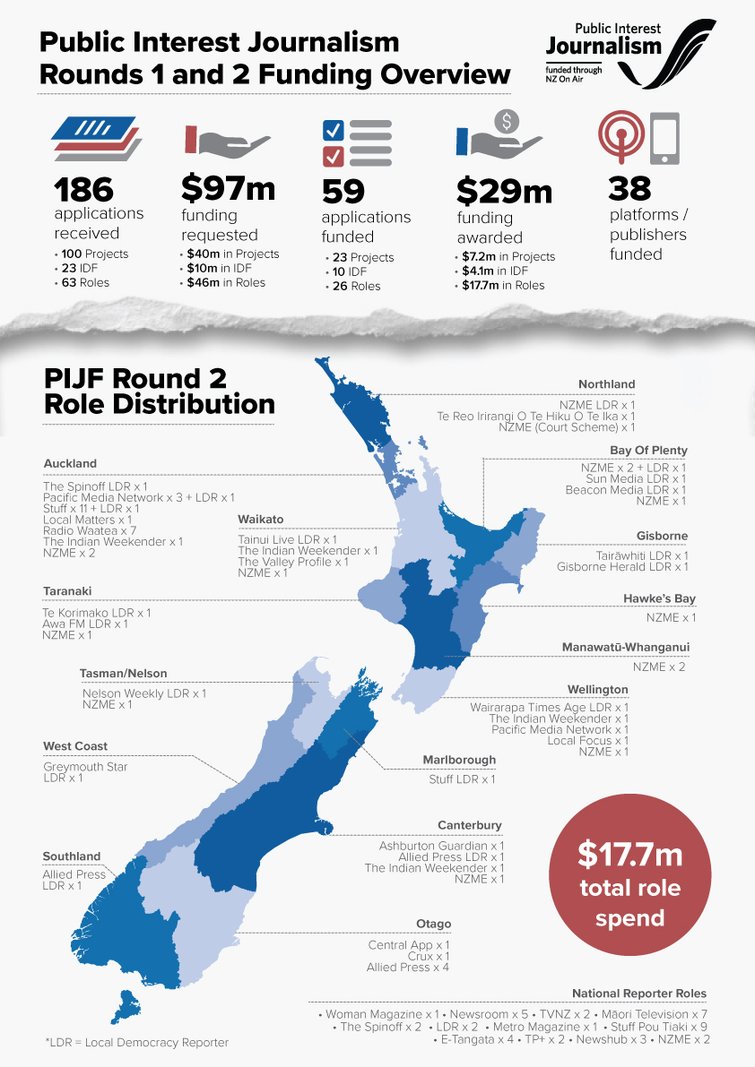